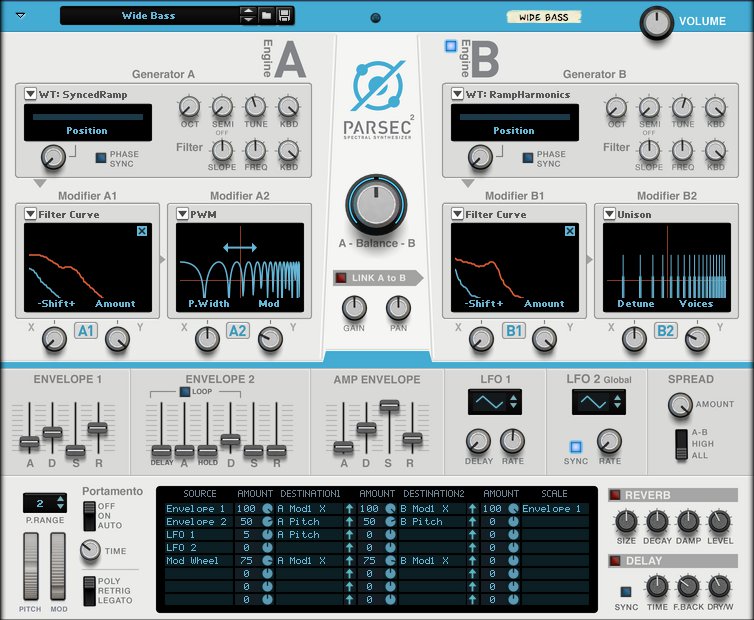 Introducing Parsec Spectral Synthesizer — the futuristic sound of additive synthesis for the Reason Rack. With two independent sound engines, up to 1024 oscillators per voice, a wide range of sound sculpting tools, built-in effects and free modulation routing, Parsec won’t leave you wishing when it comes to sonic horse-powers.

Boasting a state-of-the-art synthesis engine and an inviting user interface, Parsec was designed for the novice and the PhD of sound synthesis alike. The comprehensive sound bank with patches spanning everything from crisp, digital sounding leads to lush and evolving pad sounds, rich sonic textures and instrument sounds, will make an excellent starting point to explore the sounds of Parsec. Once you are ready to dive further, the easy to grasp interface will have you creating your own otherworldly sounds in no time.

Start building your sound in Parsec’s generators—there is one per Sound Engine. Each generator boasts up to 512 oscillators, or partials, per voice. The more partials, the richer and more detailed the sound. The generator produce their sound according to any of 12 built in algorithms: from simple waveforms like sawtooth or square to algorithms modeling the spectral content of vibrating strings and complex overtone series.

Sculpt your sound further with Parsec’s modifiers. Each sound engine has two modifiers and each of them can be set to any of 22 algorithms. Pick and choose from emulations of low pass and high pass filters, to more exotic offerings such as modifiers that mimics the effect of pulse width modulation, brick wall band pass filters and many more.

You are never out of options when it comes to controlling all the parameters in Parsec. It has three Envelopes, one of which can be set to loop mode. It’s got a comprehensive modulation bus where you effortlessly connect modulation sources and targets. If you’re the adventurous kind, flip to the back of the rack to explore the multitude of CV and gate connections made possible there.

Additive Synthesis used to be somewhat difficult to use in music production. The synthesis method has been known to be taxing on the computer, meaning that you would have to resort to less detailed sounds, bouncing tracks or freezing your tracks in order to not choke your computer under the load. Not with Parsec though. With break-through processing, Parsec will let you use up to 1024 oscillators in your sounds without killing your computer.