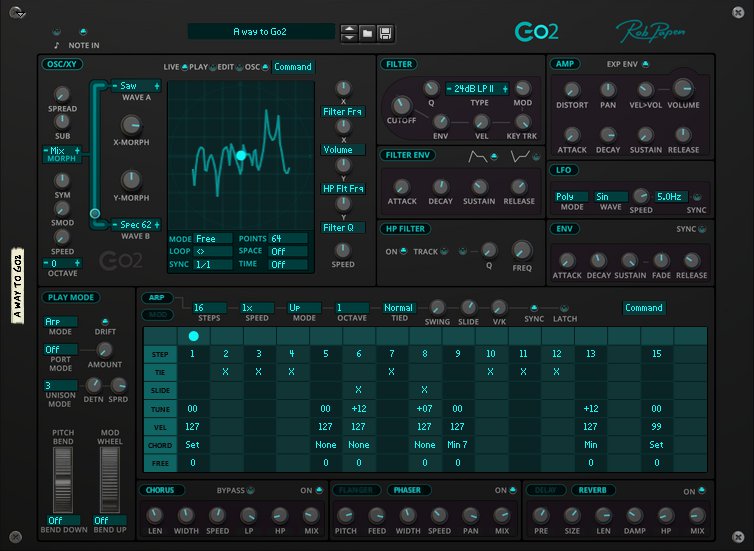 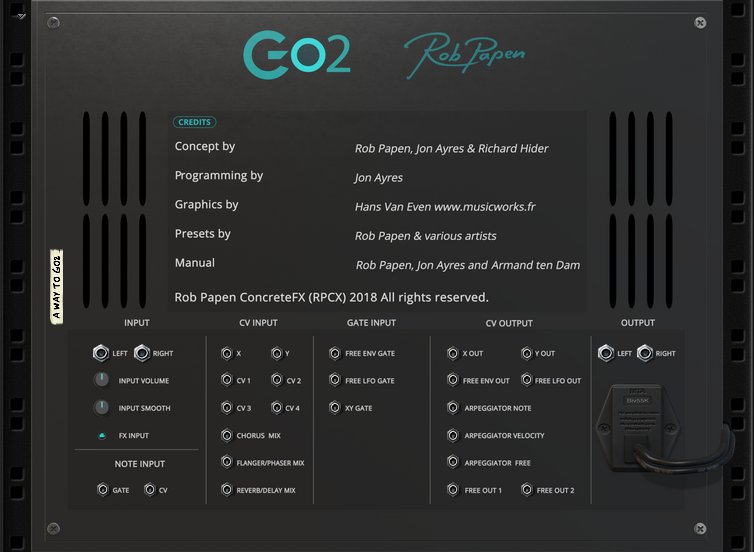 In the Rob Papen world of synthesis, there was one type of synthesizer missing…
A synthesizer that has most of the controls and features available visually all at once.

The current Rob Papen collection holds synthesizers that contain many features and types of synthesis which sometimes can be daunting to the average user.
But there is always something tempting and fun in something that is so simple!

Look at the 1980s, in which we had top synthesizers like the Roland Jupiter-8, but also at the other end of the spectrum the simpler but fantastic synths like the SH-101. And yes, both became classic synthesizers.
Compare it also whilst making music, very often less is more and this is also can be applied whilst using synthesizers. Sure, with a heavily featured synthesizer, you can also be less complex in a patch. But this often still takes more time to achieve.

And yes, Go2-RE has almost all of the controls visual at the same time but still has some unique features and sound for sure… which makes sure that it will boldly go to where no other synth in this category went before…
Presets / Folder & Global Section:

Over 1000 Presets sorted in Folders

XY Section
The XY pad is a combination of a live, interactive control and also an automated programmable modulation source
- Edit (While in Edit mode, you can move the path’s points around and thus edit the XY Path manually).
- Play Speed (The Play Speed control alters the playback speed of the recorded XY Path)
Modes: Poly, Free or Mono
- Loop modes: off, loop or bidirectional loop
- Sync To (Tempo sync the XY movement)
- Points (from 2 points up to 64 points)
- Space Quantize (Space Quantize restricts the points in the current path to a set of grid lines)
- Time Quantize (Time Quantize sets the update frequency of the XY position)
- Draw Osc (the XY screen also shows the current oscillator output if you like)
- Commands (XY Menu with the many additional options like preset path).

Play Mode Section
Arranges how Go2 plays its synthesized engine and additional features and settings can be found in this section.
- Play Modes: Poly (16voice), Mono, Legato and Arpeggiator
- Portamento with: Speed control, Rate or Time Mode, Held Rate or Held Time mode
- Port Amount
- Unison and chords
In Unison mode, Go2 plays up-to 4 unison voices, for each note played. This works at an oscillator/filter level, so you can still play up-to 16 voices in poly mode.
- Unison modes and chords:
Unison 2-4
2 Octave
3 Octave
2 SP
Major to Diminished 7th chord (3voice and 4 voice)
- Unison Detune Amount
- Unison Stereo Spread
- Pitch Bend Up / Down (The unit used is semi-tones)
- Drift On/Off When this is on the oscillator has ‘analog drift’ i.e. it has a very slight & slow drifting of tuning over time.
- Exp Env (Selects if the envelopes decay/release stages are linear or have an exponential characteristic).

Free LFO Section
Go2 has a Free LFO that generates modulation signals to be used sources in a modulation path.
- Waveform types: The available waveforms are Sine, Triangle, Saw Up, Saw Down, Square, S&H.
- Except for the S&H waveform, the waveforms are available in different start phases being 0 (normal), 90, 180, and 270 degrees.
- Speed
- Sync (Tempo Sync option)
- Modes: Poly, Free, Mono

Modulation Matrix Section
- The 8-way modulation matrix allows you to dynamically alter Go2’s parameters. using both internal modules such as envelopes and LFOs, and external MIDI Controllers such as Pitch Bend,
- Aftertouch and other control messages defined in the MIDI-standard.

Back Screen
A click on the computer keyboard TAB will display the back panel. The back panel contains several CV and GATE controls and audio input.