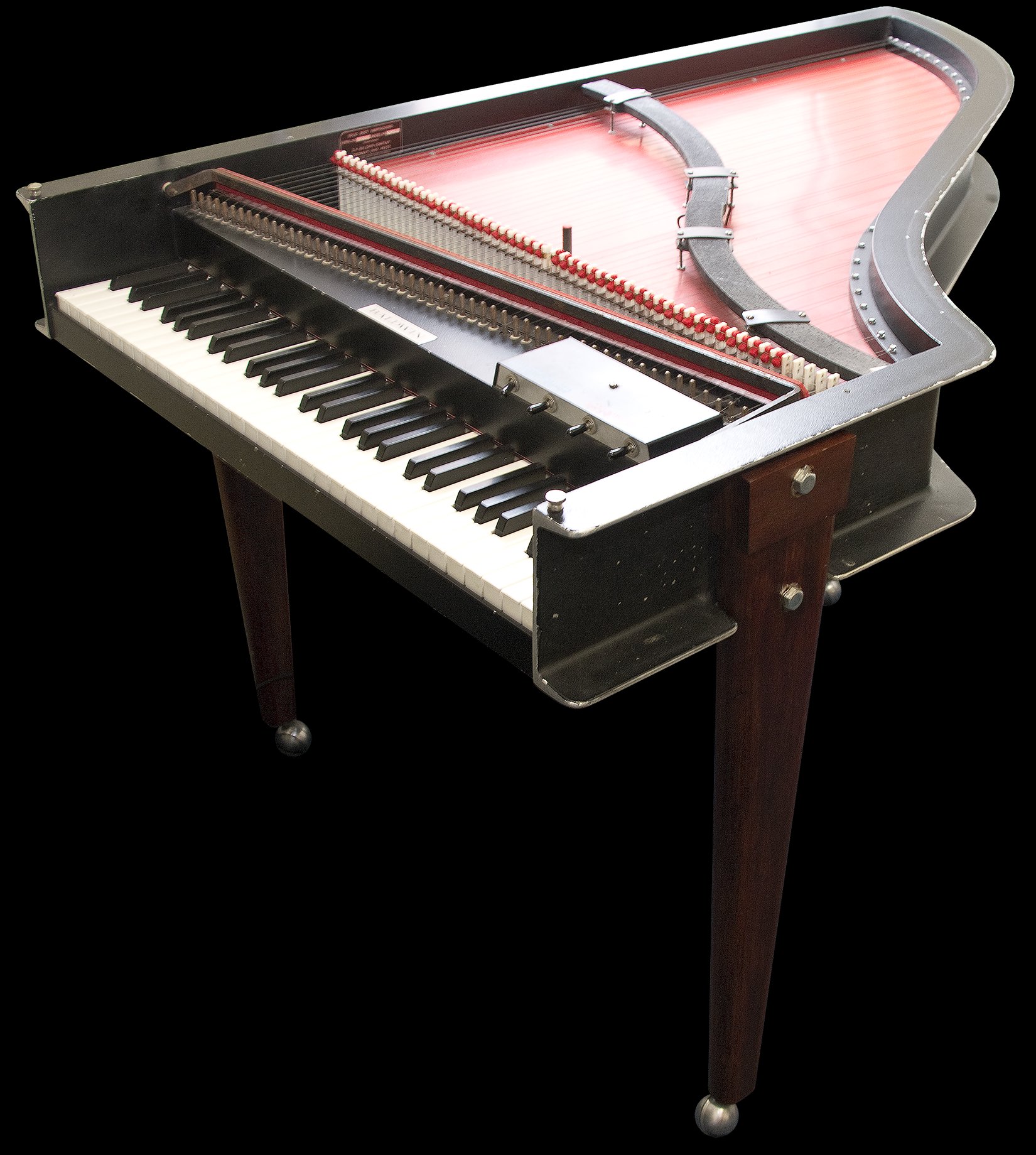 A rare and exclusive curio from the world of retro keyboards, we present our version of a design classic, the Baldwin Solid Body Harpsichord, also known as the Electric, or Combo, Harpsichord.

Designed in 1950’s America by Caleb Warner and Eric Herz, it found its niche when manufacture transferred to Baldwin in the early 1960s.

Its most notable use was George Martin playing it on The Beatles song “Because” (Abbey Road, 1969), but other references to specific song usage has been hard to come by: The Beach Boys toured with it (the same one which was reported as having recently been used by Daft Punk), but I’m unclear as to whether it featured on any of their studio recordings. Don Randi (no, me neither) used one a lot. It certainly will have cropped up on a number of pop tracks of that extraordinarily rich late 60’s era (it likely appears on a least one recording by The Monkees, for example), as harpsichords were rather in vogue at that time, but my guess is generally it was layered or fairly deep in the mixes and thus more easily mistaken for a baroque harpsichord, hence the lack of better information as equipment lists got lost to time and memory.

Sonically, it doesn’t quite sound like a standard harpsichord. The easiest way to describe it is as a guitar played like a harpsichord. Thus when the key is depressed, its string is plucked, and the two magnetic pickups turn the string vibration into the electrical signal that makes the tone.

The mid pickup (the Blue voices) provides a deeper, duller tone, somewhat equivalent to a neck pickup on a guitar, while the top pickup (the Red voices) creates a bright tone similar to playing a bridge pickup on a guitar, and is marginally more in keeping with a harpsichord. For the Combo Harpsichord I’ve extended its capabilities somewhat by duplicating the first pair of pickups as the Light Blue and Light Red voices, which can be selected from 8’ or, more usefully, as a 4’, for quick octave doubling; additionally, pickups can be offset with a short delay to create a double-strike effect (just 2-3ms works best, but you can delay up to 360ms for various flam lengths).

So while it does not possess the lightness of tonality one might expect of a typical baroque harpsichord, the electric aspect gives it a rich funkiness and grit that allows it to be more upfront. Thus I wouldn’t suggest this is in any way a replacement for a regular harpsichord, to the point where if you try to use it for baroque music in any kind of public fora, your classical music professor would probably spit their own kidneys out.

Appreciating then that this isn’t the most versatile of instruments, for anyone producing music in the indie, pop, funk, or reggae genres, this fun little beauty will certainly add an interesting alternative, if occasional, texture. Use it solo, or try layering the Red/Top pickup tone with another instrument for some extra bite!

Every note of both pickups of the Combo Electric Harpsichord was directly sampled at 24/96. It was a vintage machine, there is some AC hum towards the end of the sustain as the note level fades; however, in practice harpsichord playing — even as an electric harpsichord — tends to favour a playing style that doesn’t contain long notes.