In principle, Thor can be a daunting synthesiser, capable of generating a huge range of sounds and effects. But if you break it down into its components parts and seek to understand each in isolation, you’ll soon find that you can understand and put sounds together like a professional sound designer.

In this series of tutorials, we’re going to look at the fundamental building blocks of the audio synthesiser; the oscillators that provide the initial waveforms that we can later shape with filters, envelope generators, modulators, effects and so on. There are six oscillator types and we shall address each in turn, seeing how they differ from one another, and how you can build distinctive sounds using them. 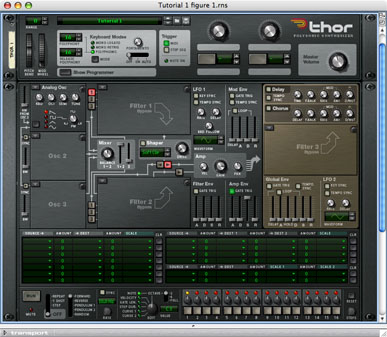 Start by invoking an instance of Thor and patching it directly to a line mixer with no effects in the signal chain. Having done so, create the basic setup shown in figure 1. As you can see, this has a single ‘analogue’ oscillator, no filters, no modulation, no overdrive, no effects, nothing… except for the VCA opening and closing instantaneously when you press or release a key.

You are now in a position to inspect each of the four types of waveform generated by Thor’s emulation of a traditional analogue oscillator. If it is not already selected, click on the sawtooth waveform, and press a single key on your controller – somewhere around middle ‘C’ would be appropriate. The result is a bright, buzzy sound that, as you become more experienced, you will instantly recognise for what it is. Now select the square wave, ensure that the PW (pulse width) knob is set to 64, and press the same key as before. The sound is still full, but has a slightly hollow quality that is often compared to that of a clarinet. Next, select the triangle wave and press the key. The sound is significantly quieter and duller. While the character is somewhat similar to that of the square wave, it’s clear that something has been removed from it. Finally, select the sine wave (the bottommost of the four waveform options) and press the key. The sound is now very simple – it’s what is called a ‘pure’ tone.

The four waveforms sound different because each has a different harmonic structure – both in terms of which harmonics are present, and at what amplitude. There is a vast amount of information explaining harmonics on the web, but much of it is inexact, and some is simply wrong. So let’s summarise these four waveforms here, as follows:

What is a harmonic?

There are many other types of objects that can vibrate, such as bells, gongs, cymbals, and all manner of other percussion. The relationships between the vibration frequencies for these are often not harmonic, and may be described by complex mathematical formulae, so we will not discuss them here.

The bright, buzzy nature of the sawtooth wave is, therefore, a consequence of the presence of all the harmonics. To a reasonable approximation, this wave is generated naturally by plucked and bowed strings, and by flared pipes, as used for brass instruments.

The square wave is a special case of the family known as Pulse Waves. It has a ‘duty cycle’ (the amount of time the pulse remains at its upper level divided by the length of one complete cycle) of 1/2 or – as it is more usually expressed – 50%.

If an object vibrates in such a way that only the odd harmonics are present and in phase with each other, and the amplitude of each is still “the amplitude of the fundamental divided by the harmonic number”, the resulting waveform is a square wave. In this case:

To a reasonable approximation, the air in cylindrical pipes closed (or blown) at one end does not vibrate at frequencies of 2f, 4f, 6f… so this is why a square wave has much of the character of a clarinet.

If an object vibrates in such a way that only the odd harmonics are present and in phase with each other, and the amplitude of each is “the amplitude of the fundamental divided by the square of the harmonic number”, the resulting waveform is a triangle wave. In this case:

As you can see, the underlying nature of the triangle wave is similar to that of the square wave, but the higher harmonics are more quickly attenuated, which is why this waveform sounds duller than either the sawtooth of the square wave.

This is called a pure tone because, assuming there is no distortion in the signal path, it contains nothing other than the fundamental.

Perhaps because most synthesisers have pre-patched signal paths, it has become common for players to create sounds using dramatic filter effects and contouring without paying enough attention to the sound generated by the oscillators themselves. However, it’s remarkable how many useful sounds can be created without recourse to filters and such-like.

But some chords demonstrate the richness of the tone:

You may have noticed the slight movement in the sound in the second example. This is a consequence of the 12-note scale used in western music, which requires notes to be slightly ‘out of tune’ with one another so that pieces of music can be played in any key.

Let’s now make things a bit more interesting by adding a second analogue oscillator set to the sawtooth waveform (see figure 2). If this has the same parameter values as the first, you might expect the sound to be the same as before, but twice as loud. This is not the case, because Propellerhead have implemented Thor’s analogue oscillators so that they are initiated with random phase. This means that the tone will differ noticeably and the sound may even disappear totally (!) when you switch on a second oscillator with the same parameters as the first. This audio example demonstrates this as oscillator 2 is switched on and off during the course of a note:

Of course, this is not something that you would often choose to do, but it demonstrates that digital oscillators do not sound natural unless you detune them or let them drift against one another. 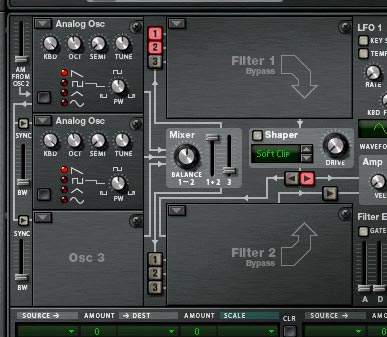 And the chords  are reminiscent of all manner of classic analogue polysynths:

An even more extreme effect can be obtain by increasing the detune to +10 and -10 or further, producing a pleasing “chorused” sound. But to maximise the quality of this, let’s now add a third analogue oscillator, again producing the sawtooth waveform at the same octave and semitone as the others, but with a fine tuning value of zero. If you increase the contribute of Osc3 in Thor’s mixer (see figure 3) you now have three oscillators in the sound, each slightly detuned with respect to the others, and the result is a lovely ‘polysynth’ sound that would grace any recording: 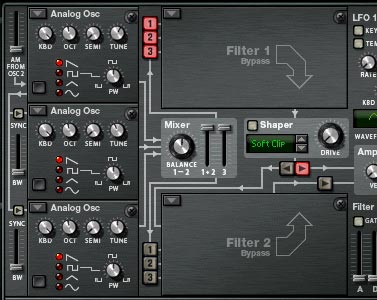 Now that you have experimented with fine tuning, we’re going to create a very different type of sound by setting the fine tuning to zero for all three oscillators, but adjusting the semitone tuning.

Select the sine wave for each of the three oscillators, and set the octave and semitone tuning as follows:

This patch (shown in figure 4) generates the first three harmonics of a harmonic series. It is also one of the most common registrations used on a Hammond Organ, on which the pitches are called 16′, 8′ and 52/3′, because these are the lengths of pipe that produce them when you play a bottom ‘C’. You can hear this patch in  and it can be used as the basis of all manner of organ sounds:

Note: If you look at the Amp Env you will see that I have increased the Attack time by a tiny amount (to 2.8ms, to be precise). This is not to alter the sound, but to reduce the click that would otherwise occur at the start of the notes due to the super-fast envelopes in Thor.

An even more interesting effect is obtained if you now modify the patch to detune the oscillators very slightly against one another. Try setting the fine tuning of Osc2 to +3 and the fine tuning of Osc3 to +6. (There’s a good reason why one value should be double the other. Can you work out what it is?) The result is, as you would expect, a slight chorusing of the sound, but in such as way that it creates an impression of a rotating speaker set to its low speed:

Increase the fine tuning (but always with the value for Osc3 set to double that of Osc2) and the speed of the effect will increase. 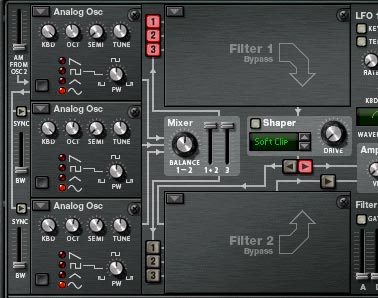 Finally, we’re going to create one of the classic synthesiser sounds of the late 1970s and early 1980s; the so-called “Bass-Fifth”. Return to a dual-oscillator configuration and select the sawtooth waves for each. With the octave=4 for both, set the semitone tuning for Osc1=0 and Osc2=7. Set the fine tuning to zero for both. It doesn’t sound particularly interesting, does it? But now reduce the octave to ‘2’ for both oscillators and press a note.  You’ll recognise the timbre of this sound instantly:

Finally (you knew that I was going to say this, didn’t you…) fine tune Osc2 to +16. As before, this produces a slight chorusing effect but, because the pitch of the note is much lower, the effect is rather different from the “polysynth” timbre demonstrated in sound 6. The result – which takes us deep into the bass territory of early modular synthesisers – is shown in figure 5 and can be heard in this audio example: 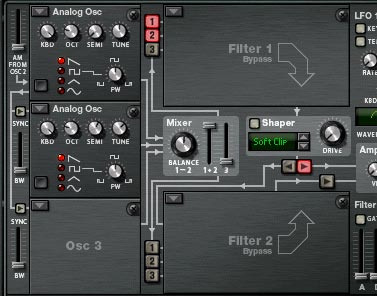 So that’s it for now. We’ve created some distinctive and classic synth sounds without touching a single filter, modulator or (with one tiny exception) envelope generator. There’s a significant lesson there.

In the next tutorial, we’ll look at how you can extended your palette of sounds using two more of the sophisticated facilities built into the oscillator bank itself: amplitude modulation, and sync.