In the first of these tutorials, I demonstrated how you can use detuning to create complex ‘chorused’ sounds. In the third, I showed how Pulse Width Modulation of a pulse wave (PWM) splits a single frequency into two components, thus emulating the sound of two detuned oscillators. Both of these are powerful synthesis techniques, but they are limited (in the first case) to the number of oscillators in the synthesiser, and (in the second) by the fundamental nature of PWM and what it can achieve.

Happily, unlike true analogue synths, Thor incorporates an oscillator type specifically designed to provide an extensive range of rich, chorused sounds, and it can do so using just a single oscillator slot. The beastie in question is the Multi Oscillator, and in this tutorial I am going to use a single instance of this to create one of the most challenging of all synthesised sounds: the ‘analogue’ choir.

What is a Multi Oscillator?

The Multi Oscillator is quite a complex module, but if you break its operation down into individual concepts, all becomes clear.

Let’s start by reloading the basic patch from the start of tutorial #1, but instead of an Analogue Oscillator, we’ll insert a Multi Osc in the Osc 1 slot. You can now see that determining the waveform, the pitch (octave, semitone and fine tuning) and the keyboard tracking is the same as before. Sure, the set of waveforms offered is slightly different from the Analogue Oscillator, but this shouldn’t obscure the fact that – at this level – you control the Multi Osc in exactly the same way as the Analogue Osc. So let’s now look at the bits that are different: the Detune Mode and the AMT (amount) control…

With the AMT knob set to zero, the Detune Mode is irrelevant, and a Multi Oscillator generates a single frequency just like an Analogue Oscillator, so you can use it in the same way. Hmm… this is not strictly true, because the Fifth and Octave modes produce two pitches when the AMT is zero, as described below. But the key here is that none of the modes produces a detuned sound when the AMT is zero. So, let’s move on…

When you increase the AMT, the Multi Osc will generate eight pitches simultaneously. This means that, for example, if you select the sawtooth wave and (say) the Random 1 mode, and then increase the AMT above zero, eight separate sawtooth waves are created, each slightly detuned with respect to the others. This is equivalent to having up to eight sawtooth waveform generators in a massive oscillator bank, but much more economical in form and use. What’s more, there are things that you can do with the Multi Osc that would not be practical with eight individual oscillators. (We’ll touch upon this later in this tutorial.)

The final element in the Multi Osc is the Detune Mode itself, which determines the way in which the frequencies of the eight waves are distributed. At low values of AMT, these can produce quite subtle results, but at high values of AMT, they can be wildly different, and you will be able to find many way to use them to create new sounds. The eight modes are:

Having digested all of this, we’re now ready to create sounds with the Multi Oscillator.

There are many sounds that you can synthesise using the Multi Oscillator, from conventional things such as ensemble strings and brass to enharmonic sounds, percussion and extreme ‘off-the-wall’ effects. However, there’s one sound to which it’s better suited than any other form of analogue-style oscillator, and that is the ‘human’ choir. The reason for this should be obvious: a choir is an ensemble of people who are singing at almost the same pitch, with quasi-random deviations between each person’s voice and that of the others in the ensemble.

So let’s start by invoking a Multi Oscillator in the minimal configuration used as the starting point for previous tutorials. (See figure 1.) I have chosen the sawtooth waveform in the oscillator, and applied a gentle Attack and a moderate Release in the Amp Env. It’s a pretty boring timbre, and there’s not much you would normally choose to do with it: 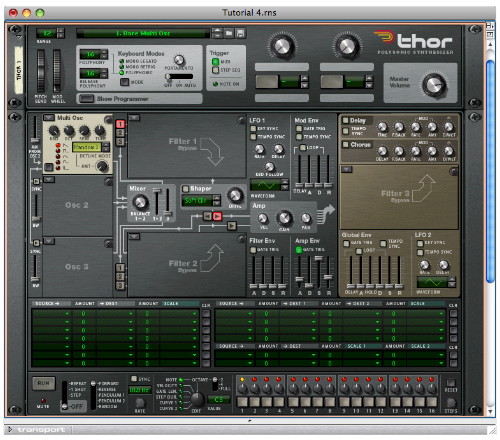 Figure 1: Setting up a Multi Oscillator

We can improve this considerably by invoking the ‘multi’ aspect of the oscillator, selecting one of the Detune modes, and dialling in an appropriate AMT. In this case, I’m going to choose Random 1 mode and apply a detune of 28, as shown in figure 2. Sound #2 demonstrates that this is much more promising:

Indeed, without any further synthesis – no filters, no modulation, nothing… – this is an excellent sound that would grace many tracks.

In a moment, we’ll move on, invoking other modules to modify the sound. But before doing so, I’m going to introduce some useful tricks that demonstrate how subtle the Multi Oscillator can be. Let’s turn to the Modulation Matrix and link the amount of oscillator detune to the pitch of the note so that, at low pitches, there will be less detune than at higher pitches. This will increase the depth of the ensemble effect as you play up the keyboard, simulating what tends to happen in a real, human choir. Having done so, let’s also invoke a 6Hz triangle wave LFO and direct this to the amount of detune. This is a wonderful facility, because it means that we can increase and decrease the amount of detune of the eight oscillators to create a wonderfully rich, chorused sound. (See figure 3.)

Sound #4 has both of these types of modulation present and, as you can hear, it is more heavily chorused, with a complex, tremulant quality that will add character when we turn this ‘stringy’ sound into a choral one:

Now we’re going to introduce something a bit special. This is Thor’s Formant Filter, which synthesises the sound of the human vocal tract. Describing the Formant Filter in detail is beyond the scope of these tutorials, but if you experiment with it, you will find that the position of the dot in the middle of the module’s X/Y display enables you to create a wide range of vowel sounds. Mind you, this is not as simple as it seems. Listen to Sound #5:

This is the Multi Oscillator sawtooth wave with no detune (AMT=zero) played through the Formant Filter set up to create a deep, basso voice. It has a vocal quality, but it’s nothing special. Now listen to Sound #6, which is exactly the same patch but with detune applied:

Wow… this is a remarkable result, and you may recognise it as an imitation of the revered Roland VP-330 Vocoder Plus, the instrument that provided much of the character of Vangelis’ soundtracks for Chariots Of Fire and Blade Runner, and which was used by numerous players to replace their Mellotrons! 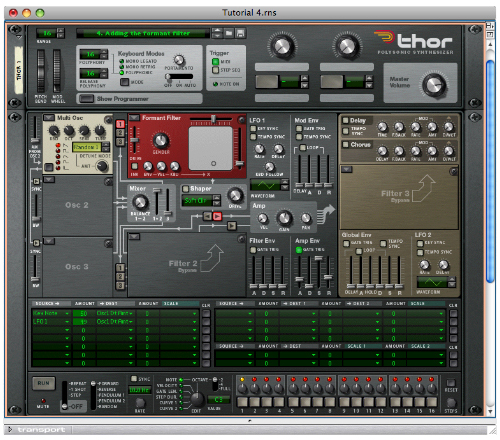 We can now play the chord sequence again, but through the Formant Filter:

This is a better choral sound than you’ll obtain from almost any analogue synthesiser, and it would be a fantastic result if it created the choral sound that I want across the whole range of the keyboard. Unfortunately, it doesn’t. This is because, if I want to simulate male voices in the bass and female voices in the treble, the Formant Filter needs to change its characteristics as the pitch of the sound changes. 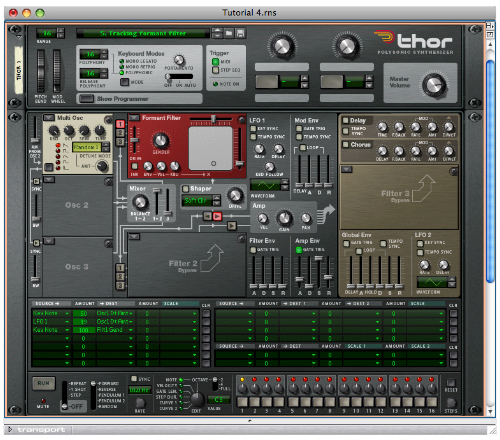 Our sound is now all but complete, and perfectly useable. However, I am going to refine it a little further to obtain exactly the result I want. To do so, I’m going to add a low-pass filter in the Filter 3 slot. This will remove the higher frequencies and give the patch a band-limited quality that you will recognise instantly if you’re a Mellotron aficionado. I’m also going to add a little delay to spread the result across the stereo field. (See figure 6.) 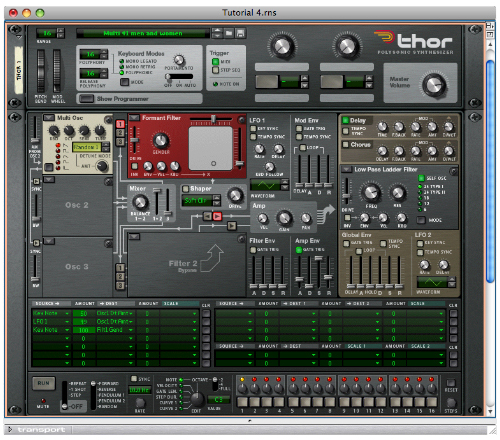 Playing the chord sequence again reveals that the female character of the sound has been retained at higher pitches:

So I’m now going to add a few deeper notes to reintroduce the bass and tenor (male) singers. The result is Sound #10, which I think is gorgeous:

What’s more, I’ve created it without using a single chorus unit or any external effects!

So, could you emulate the Multi Oscillator’s sound using Analogue Oscillators? To be honest, neither in Thor, nor in anything short of a room-sized polyphonic modular synth that offers eight oscillators and eight dedicated LFOs for each note that you play. Not allowing for the overlap in notes caused by the contour generator’s Release, the chord sequence in these examples uses six notes at a time, which means that it would require 48 analogue oscillators and 48 dedicated LFOs to begin to recreate Sound #10. As you can now appreciate, the Multi Oscillator is a very powerful and desirable element within Thor.

Having finished this tutorial, I thought that it might be interesting to replace the Multi Oscillator in this patch with a single instance of the Analogue Oscillator. I left everything else unchanged, and ran the chord sequence one more time:

Blimey…! That’s nothing like the choral sound we created, and it demonstrates a very important lesson: mo matter what you do to a patch by way of filtering and adding effects, you can’t add back what isn’t there in the first place.