Thor demystified 13: An introduction to filters

To understand what filters do, and why they are one of the most important building blocks in synthesis, you have to understand a little about the nature of sound itself and, in particular, the nature of waveforms. So I’m going to introduce this series of tutorials about Thor’s filters by talking first about what constitutes the sound generated by an oscillator, whether analogue, virtual analogue or sample-based.

Mathematics tells us that any waveform can be represented either as a wave whose amplitude is plotted against time or as a series of components whose amplitudes are plotted against frequency. Often, these components will lie at integer multiples of the lowest frequency present – for example, 100Hz, 200Hz, 300Hz… and so on – and these are then known as the fundamental and its overtones, or as harmonics. In more complex sounds, there may be components that lie at non-integer frequencies, and these are sometimes called enharmonics. The sound may also include noise that is distributed over a range of frequencies and whose precise nature is determined by all manner of factors that we need not discuss here. Figure 1 illustrates all of these. 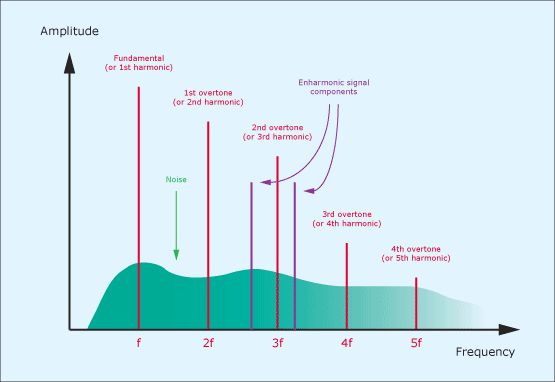 Let’s now look at figures 2 and 3, which represent a very common wave – the sawtooth – expressed in both these ways. The first of these figures shows it as a waveform, while the second shows the first five of its harmonics. The two look very different, but they describe the same thing. A relatively simple mathematical operation called a Fourier Transform converts one to the other, and it can easily be proven that they are exact equivalents. 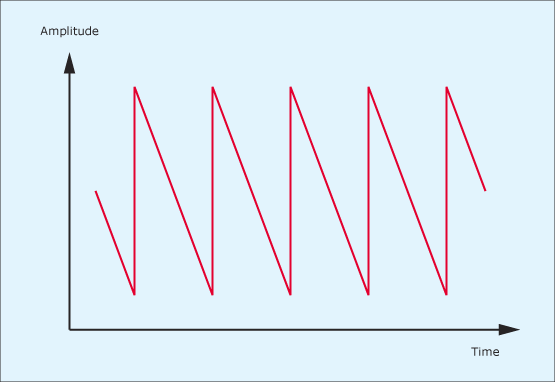 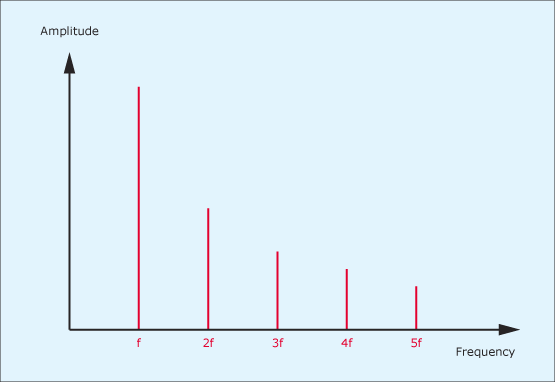 Figure 3: The first five harmonics of a sawtoth wave

What does all this have to do with a synthesiser’s filters?

Let’s assume that you wish to modify the nature (and therefore the sound) of a wave generated by an oscillator. In theory, you could do this by warping the wave itself in some fashion, and this is the basis of one of the common forms of digital synthesis: Phase Distortion. But wave shaping can be a non-trivial exercise so, in the earliest days of synthesis, designers instead adopted devices that changed the amplitudes of the components that comprised the sound’s spectrum. These were, of course, filters.

To describe the actions of various types of filters, let’s consider the waveform with the spectrum shown in figure 4. As you can see, this has an harmonic series in which every component has equal amplitude. (It would be a horribly bright and harsh sound, but we need not worry about that.)

Figure 4: A sound whose harmonics all have equal amplitude

Now let’s modify this sound using the most common filters found on an analogue or virtual-analogue synth. The most useful of these is the low-pass filter which, as the name implies, attenuates the signal components above a certain frequency (called the ‘cut-off frequency’, or fc) and passes those below it. The result can be expressed as figure 5. 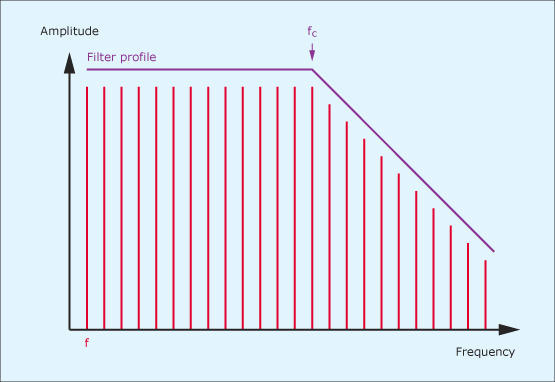 Figure 5: The action of a low-pass filter.

The high-pass filter is another common device. Again, its action is described in its name: signal components above the cut-off frequency are passed unhindered, while those below it are attenuated. (See figure 6.)

Figure 6: The action of a high-pass filter.

Figure 7: The action of a band-pass filter.

Finally (for today) we can consider the situation where the signal is passed through the low-pass and high-pass filters in parallel rather than in series, and where fcL is lower than fcH, rather than the other way round. In this case, a range of frequencies lying between fcL and fcH are removed so, again for obvious reasons, this is called a band-reject, or ‘notch’ filter. 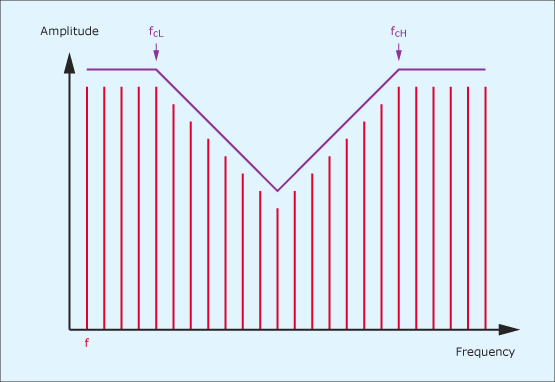 Figure 8: The action of a band-reject filter.

This figure of 6dB/octave is a bit of a magic number; far from being arbitrary, it’s a consequence of the way that the universe works. However, a 6dB/octave filter is not a very powerful mechanism for altering a signal’s character; it’s little more than a tone control. Fortunately, it’s possible to cascade such filters to create more powerful devices with slopes of 12dB/octave, 18dB/octave, 24dB/octave… and so on, and these are the filters most commonly found in analogue synthesisers or emulated in virtual analogue synths such as Thor. 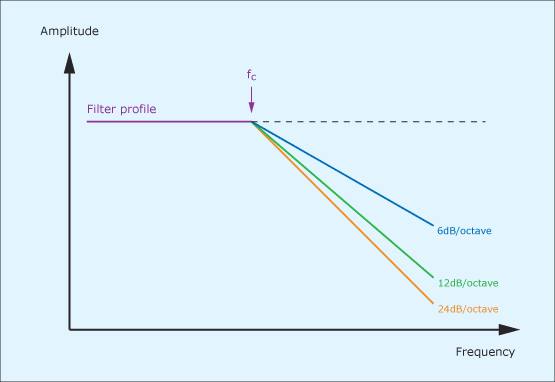 Before moving on, it’s only fair to admit that this is still only an approximate description of the various filters. For example, I have drawn diagrams 5 – 9 to show the attenuation starting at the cut-off frequency, but that’s wrong; the cut-off frequency is defined as being the frequency at which the signal is already attenuated by 3dB. In addition, it’s too simplistic to describe a 24dB/octave filter as simply four 6dB/octave filters of exactly the same cut-off frequency. A closer representation of the truth is shown in figure 10, which shows the profile that you obtain when each of the stages’ cut-off frequencies are only approximately aligned with one another. Finally, there’s the issue of phase response. Analogue filters really mess with the phase relationships of the signal components, and this can drastically alter the shape of the output waveform, with all manner of subtle but potentially important consequences when creating complex synthesiser patches. Nonetheless, these are all secondary effects, so let’s now put theory into practice and hear how each of these filters affects the harmonically rich sawtooth wave. 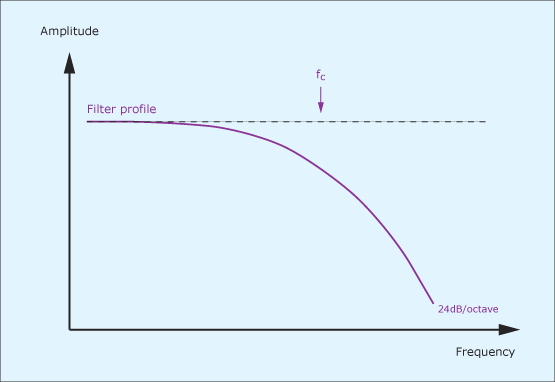 Figure 10: A better representation of a low-pass filter

Discovering these filters in Thor

We’ll start with the patch in figure 11. This shows the output from a single oscillator generating a sawtooth wave directed straight to an Amp controlled by an envelope that causes it to pass sound when a key is pressed. There is no modification of the sound while the note is playing so, if you press a key, you’ll obtain the easily recognisable buzz of a sawtooth wave, as you would expect:

Let’s now load Thor’s State Variable Filter into Filter slot #1 and use it to demonstrate each of the four filter characteristics described above. As you can see in figure 12, I have set the ENV (envelope follow) to its maximum, whereas the VEL (velocity follow) and KBD (keyboard follow) knobs are set to zero so that these will have no effect. The Drive level is only moderate, because overdriving the input would create complications that would confuse the issue, and I have set the RES (filter resonance) to zero.

Note: Filter resonance is a very important characteristic of synthesiser filters that we will come to in later tutorials.

Figure 12: Setting up the filter

We’ll continue by selecting the LP12 (low-pass, 12dB/octave) filter option, with the cut-off frequency (‘FREQ’) at its minimum. You can now use the Filter Env to apply a simple Attack/Decay (AD) contour to the cut-off frequency, thus opening and closing the filter smoothly. (Do this by switching on the GATE TRIG in the Filter Env section and raising both the Attack and Decay sliders to their maximum values, as shown in figure 13.) If you now play the same note as before, you’ll hear it start with a very dull, muted character, then become steadily brighter until the unfiltered sawtooth wave is heard, and then become dull again as the filter closes: 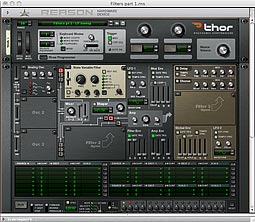 You can hear the high-pass filter equivalent by selecting the HP12 (high-pass, 12dB/octave) filter mode and playing the note for a third time. Now you’ll hear the unfiltered sawtooth wave at the start of the note. The sound will then become progressively thinner as the cut-off frequency is raised and only the highest frequency components survive, before the sound becomes fuller again as the cut-off frequency returns to its minimum value:

Next, selecting the BP12 (band-pass, 12dB/octave) filter mode allows you to sweep a window (called the “pass-band”) up and down the frequency axis, letting through a moderately narrow band of frequencies from the low end to the high end of the spectrum, and back again:

Finally, selecting the NOTCH or “band reject” filter (with its associated knob in the 12 o’clock position) creates a rather interesting sound as a ‘hole’ in the spectrum is swept up and down the frequency axis:

Using a low-pass filter to create a specific sound

You now have all the tools necessary to generate a huge range of classic and innovative synthesiser sounds. To illustrate this, I’m going to shape the response of the low-pass filter in sound #2 to create one of the staples of all synth libraries: the brass patch.

This requires only one oscillator, so we can continue to use the single Analog Osc used above. Also, as above, we’ll use an almost ‘square’ Amp Env (figure 14) to ensure that the note speaks quickly and dies away almost immediately that you release a key. But the key to the patch is how we alter the cut-off frequency of the low-pass filter to imitate the way in which the sound of a brass instrument becomes very bright during its Attack phase, them subsides during its Decay before reaching its Sustain level. 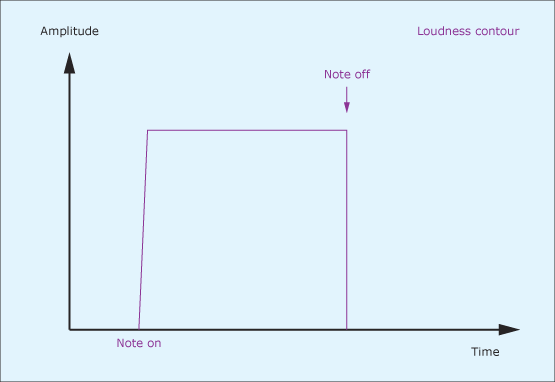 Figure 14: The loudness contour for a brass patch

Figure 15 shows the Attack and Decay stages of the filter contour that will determine the brightness at the start of the note, and the Sustain level that is then maintained until you release the key. Since the Amp Env in figure 14 returns to zero almost at the moment that you release a key, you may think that there’s no point in setting the “R” (Release) in the Filter Env to anything other than zero. However, Thor’s envelope generators are very rapid, and you will hear the filter snap shut if the Release is set too close to zero. (Many novices complain that the contour generators on their synths generate clicks when the Attack and/or Release controls are set to low values, not realising that this is a compliment to the designers, not a fault.) Consequently, you should set the Filter Env Release to a few tens of ms to ensure that each note ends smoothly. 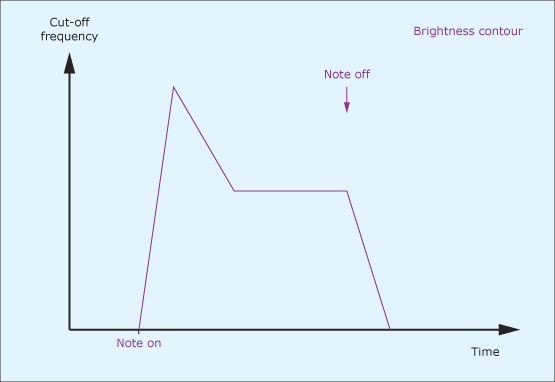 Figure 15: The brightness contour for a brass patch

Of course, the Filter Env contour will be irrelevant if the filter itself is not set up correctly, so you must ensure that its cut-off frequency is turned to its minimum, whereas its ENV knob must be near or at its maximum so that the tone is maximally affected by the Filter Env. You can hear this in sound #6, which is already beginning to sound “brassy”:

Nonetheless, the sound is still rather sterile because it lacks the “rip” that occurs at the start of each note on a genuine brass instrument. You can inject this by modulating the filter cut-off frequency using a fast LFO – in this case, LFO2 running at 60Hz or more – directed to the cut-off frequency via the modulation matrix. However, you must also shape the amplitude of the modulation using the Mod Env to ensure that it’s curtailed not long after the start of the note. (See figure 16.) You can see each element of this patch in figure 17 and hear the results here: 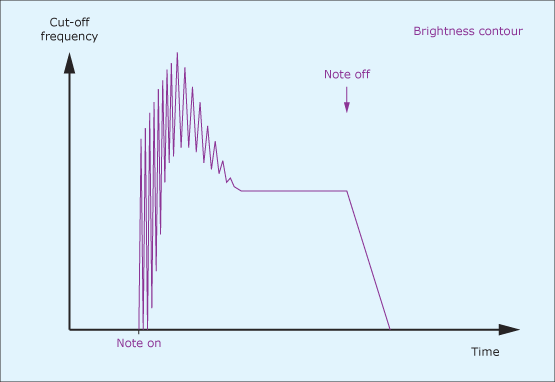 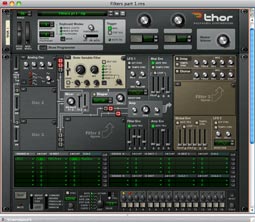 To be honest, there are many more things that we could do to make this sound more authentic. For example, we could add vibrato. What’s more, the harmonics of a real brass instrument develop at different rates after a note is blown, so we could add additional filters to emulate this, and it would also be good to add noise to emulate the breathy turbulence that occurs in a blown pipe. But doing so would take us off into realms that we’re not going to address today, so all that’s now necessary to play one of the classic analogue synth patches is a sprinkling of reverb and the right choice of notes and we’re done: