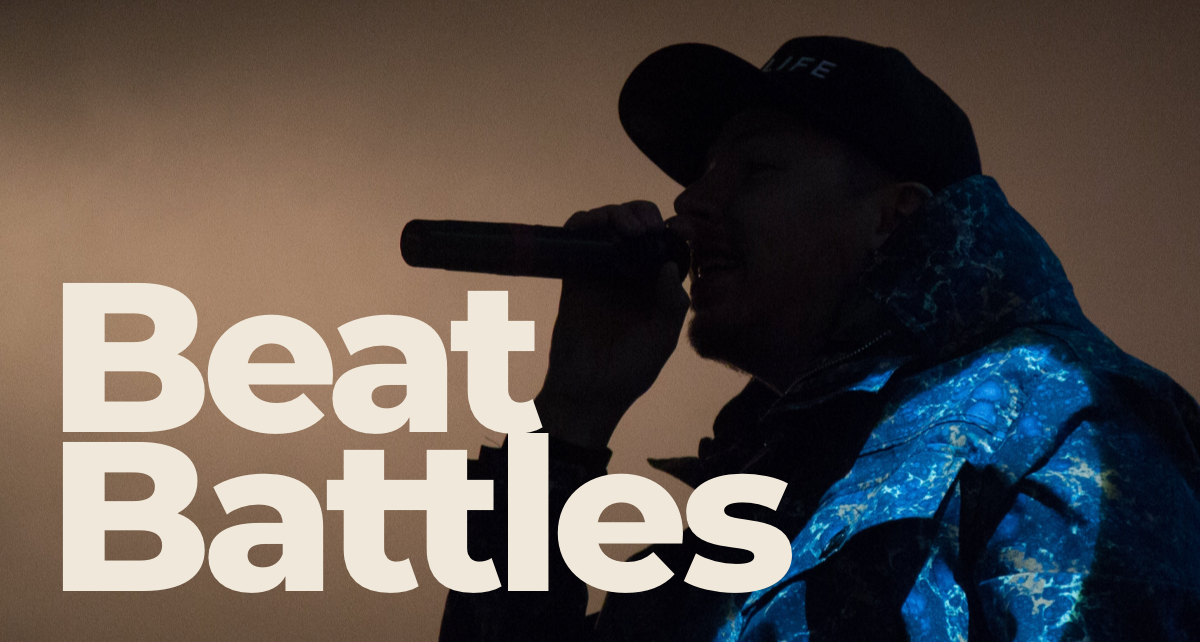 These days, the tuned 808 kick drums and intricate hi hat patterns of trap music are everywhere. You might think it is a new sound but its roots actually go back over 25 years. This subset of southern hip hop was born in the streets of Atlanta in the mid 90s and was first heard on the albums of artists like Outkast and Goodie Mob. By the mid 2000s, T.I., Young Jeezy and Gucci Mane really sharpened up that sound and brought it to a wider audience through their hit albums. Fast forward another decade and the trap sound has completely transcended hip hop and is now regularly heard in everything from EDM to K-Pop to Reggaeton and even the glittery pop hits of Beyonce, Rihanna and Miley Cyrus.

The Beat Battles sound pack is our tribute to trap and includes everything you need to make your own bangers. To make this pack, we teamed up with sound designer Jason Drewry and his company DNA Labs Software in Miami. Jason and his team really delivered an authentic and futuristic set of presets that will fit right into your productions and we’re excited to share it with you!

* Some patches require Europa or Parsec.

About the Sound Design
I caught up with Jason on Skype to talk about his sound design and influences.

“Growing up, I made beats and all my friends rapped. Eventually, all the rappers started making their own beats and I realized I would need to make money some other way. That’s when I got more and more into sound design and selling sound packs and instruments.” says Drewry.

I asked him why he chose to focus on trap music for this sound pack. “My favorite music growing up was gangsta rap and I think that sound has turned into trap music today. I love music with hard 808 sounds and eerie themes. Like Three 6 Mafia or Gucci Mane. In fact, this pack is inspired by the song ‘Slippery (feat. Gucci Mane)’ by Migos. I like the sounds and production of Migos, Deko and OG Parker and tried to capture that here.”

Going deeper into the sound, Drewry says, “Personally, I really like dark, mysterious and futuristic sounds and DNA Labs really focuses on that. I mean, we like old school sounds too, but we always incorporate synths and new effects to make them sound modern and cool.”

I think users of this sound pack will really hear the hard, dark and sometimes eerie sounds.

Exploring the patches
One thing to know about the Beat Battles sound pack is that the components of the combinator patches are included as their own separate devices for your convenience (the rack devices are neatly broken down into sub-folders by device type). This makes it easy to “remix” a patch to make it uniquely yours. For example, if you like the gated sound produced by the Alligator from “Slippery Offset Gates” combinator patch, you can quickly pull up just that Alligator from the “Alligator patches” folder and run your own sound through it for a custom sound.

Some of my favorite sounds from this pack include:

Slippery Offset Gates — This combinator patch really gets the mysterious and ominous synth sound heard throughout the ‘Migos track Slippery (feat. Gucci Mane).’ It is created by combining a Europa synth lead with an Alligator for a chopped up, gated sound. Be sure to play with the “Offset” knob as that can instantly give you different rhythmic patterns. Adjusting the “Gator Attack” knob can give your pattern more or less “edge” on the attack of the gate so be sure to dial that in for your particular track. Drewry offers up a good tip here, “Echo and reverb makes this sound good. The Europa already has delay and reverb on it, but you can always turn it up even more.”

808 Trunk Demolisher Sub — This Combinator patch creates an absolutely HUGE 808-style kick using two Europa devices combined with an NN-XT. Having three separate devices to generate this one sound is much more flexible than just playing back a recorded sample since all the parts of the 808 sound (the main kick, the sub-kick, and the ringing tone) can be adjusted independently. This sound is really flexible and can be pushed and shaped in different ways, so be sure to play with the “808” and “Synth” buttons and “808 Level” and “Tape Comp” knobs to really get it dialed in for your track.

Fun fact: Most producers would agree that the “808” drum machine is a critically important part of trap music. What is funny is that almost nobody uses a real Roland TR-808 drum machine to achieve this sound! This is because 1) it is much faster and easier to use samples and/or virtual instruments and 2) vintage Roland TR-808 machines are rare and eye-wateringly expensive. In fact, working with software can get you a sound that is bigger and “even better than the real thing!”

Wet Atlanta Trap Saw — This traditional, detuned “super-saw” sound is created using Thor. I included this in my favorites because I liked how the tiniest addition of vibrato transformed the plain underlying sound into dark, eerie preset that works perfectly in trap music. Small things can have a big impact! Drewry then rounds out the sound with a little ping-pong delay and reverb to give it some movement and ambience. “I actually used the old Reason reverb [the RV-7 module] on this patch. Reason has newer and better reverbs but this old module has a really nice air on it. I liked its sound and vibe.” he says.

Dr. Migos Slippery Kit — This Kong drum patch is a very simple but highly effective 808 drum kit with really great sounding samples. Use this alongside the “808 Trunk Demolisher” preset for an instant, authentic trap rhythm section.

Tip: This kit has two kick drums with a much tighter sound than the huge “808 Trunk Demolisher Sub” patch. Massive kicks like the Trunk Demolisher need time to settle down so if you want to add in some accents or ghost kicks, then use the Dr. Migos Slippery Kit. This will add some sonic variety to your track.

Silent Hill Flute — This Parsec 2 based patch generates an sinister and otherworldly flute sound that would be at home in a video game like Silent Hill. It’s a great way to add some ambience to any trap beat. As Drewry says “I like dropping at least one ghostly sound in my beats–if not more. One way I get that sound is by using a sine wave LFO to modulate the pitch a very small amount.” He jokes, “and… of course… add a little reverb and delay, like I always do!”

Tip: This patch really makes use of the mod wheel (which controls Parsec 2’s B Generator) so make sure you experiment with it. If the mod wheel is turned all the way down, you’re only hearing a part of the sound!

Trap Beat basics
There are many ways to make a great trap beat but here are some basic guidelines:

Play an 808-style kick (like the “808 Trunk Demolisher”) with long sustain. This gives you a kick and a bass note all in one instrument, so a separate bass is not needed.

The 808 Trunk Demolisher is huge and can get tiresome if played too often, so use the Dr. Migos Slippery Kit if you need ghost or accent notes.

Switch on “note repeat” and play your 808-style closed hi hats every 16th note, but add in occasional 24th or 32nd note rolls to add variation and excitement to the beat.

Use 808-style snares or claps and keep them short and tight. Look to the Dr. Migos Slippery Kit for good, authentic sounds.

From here, you can take your track in different directions. For example, keep it super minimal and have just drums and vocals. Alternatively, you can add in short, small elements as ear candy (like the Silent Hill Flutes patch). It’s also possible to add in longer, more ambient or rhythmic sounds (Slippery Offset Gates combinator) to establish a mood.

The key with trap music, however, is to keep it sparse and let the vocals sit clearly on top. We’re not going for a “wall of sound” here as we do in Rock music. Keep it minimal and when you get the balance right, you’ll have a huge, hard drum sound that rattles your studio monitors (or car speakers) and the vocals will sit clearly on top!