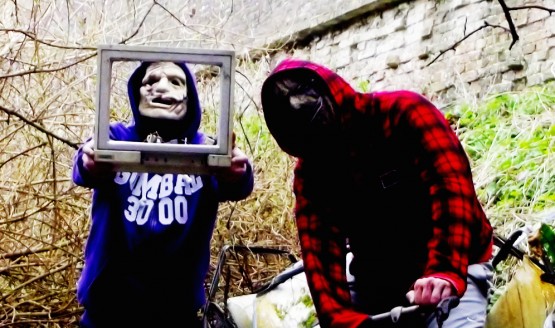 Suspect and Stenchman, collaborating under the name Suspicious Stench, are two mad-men producers from Dover, UK. After hearing their music, we had to ask about their guttural, growling dubstep sound design. Read on to find out how they do it and download two free Combinator patches!

How do you use Reason in your music making?
We use Reason for everything. Quite a lot of people ReWire it but with all the new rack extensions there isn’t much reason to add loads to the CPU when we have everything we need in one simple package.

Suspicious Stench are really two artists collaborating, how do you handle that?
Sometimes we make stuff in the studio together and other times we just pass the file back and forth via instant messaging. Also if one of us was to start a project the other would sometimes finish it then go over final details and mix down together.

What do you do when writer’s block strikes?
We tend to make bass patches & drums when we hit writer’s block just so something’s being done and normally it sparks an idea in the process. Either that or watch YouTube videos of people falling over.

Could you tell us a bit about how you approach sound design?
We’re pretty random when it comes to approach. We don’t really have a formula or a certain structure that we stick to, we basically just make whatever comes out depending on what mood we’re in or what we’ve been inspired by at the time. We tend not to start from scratch when designing sounds but instead use a preset that has characteristics we like and shape the sound accordingly

Suspect’s Hover Craft Bass
It’s a pretty gritty wobbler style bass, which Malström is really good for. I started off with just a Malström and I pretty much just mess about with buttons until I get a good sound and then tweak it from there. I used the Modulator B curve 17 as I don’t use it very much and was after a bit of a different wave pattern. I used 2 square 16’s with a slight bit of oscillator motion on just for extra movement. I also moved the Index on one of the oscillators, but you can set this to how you want it. I set the Shaper to 86 on Noise, this just makes it a little more prominent and fuzzy if you like. I’ve also put the attack up on both oscillators so you don’t get so much of a stabby sound on the first part of the note. Also on the Modulator A, I’ve put a pitch bend on so that the note goes up a bit as it plays to make it more interesting.

I added a compressor to it just to level the sound out and stop it being so harsh. I then EQ’d it with an old school equaliser, the PEQ-2, just to take a little bit of the harshness out again and some low end. I then added a Scream 4 to it as I felt it needed to sound a little more distorted to sound fuller. Then at the end I added a bit of reverb, a Rv-7 Digital Reverb, just to make it sound a bit more wet and to help it sit in the track better. That’s basically all i did to make the sound. You can use this bass as short stabby notes or have it as a longer note to get the full wobble. Also you can change the Modulator curve to suite you and automate the Index which keeps the sound interesting as the track goes on.

Stenchies Lazer Reece
This is a pretty simple dual layered reece patch with a bit of a twist. The oscillators are all Multi Osc’s set to saw waves, all tuned slightly differently and with a little random detune as well to give a thick texture. The oscillators then go into a Notch Filter which is set differently on the two Thors to give the patch more width and character. The LFO also affects these filters on both instances, but only a relatively small amount (53).

I used slightly different effects on each of the thors, the top one has a Scream 4 on the Tape setting and an EQ with a wide mid cut. The other has a Scream 4 on the Fuzz setting and an RV7000 with the Hall reverb setting applied. I normally use the EQ on the RV7000 to cut all the low frequencies, but I kinda liked the muddiness with the full range of frequencies getting affected so I left it. The EQ is pre-setup to cut though so you can just turn it on if they wish.

I have used the built in Chorus unit on one of the Thors. I tend not to use it on multiple layers as it can soften the sound a little when used too heavily. There is also a Phaser unit that is routed to the AUX send of the line mixer. The amount it is applied to the second Thor can be controlled from the fourth rotary on the Combinator front. This is so you can give it some movement in productions. I have also used the other modulation routers to control a lazerish womp out of one of the multi osc’s. The speed and intensity of it can be controlled from the Combinator. Finally there is a control for the filter frequency for one of the notch filters, again this is to give chance for automation that gives movement to the synths sound.