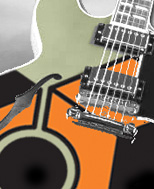 For years I’ve experimented with MIDI guitar with mixed results (so much hardware, yikes!). After getting Reason I’ve decided to dust that guitar controller off and see what damage can be done.

The great thing about using a MIDI guitar with Reason is that each string can go to a separate device that you create. Your low E can go to a Subtractor for bass sounds, while the A string can be sent to a Malstrom, D string to a NN-XT sampler, etc. When you have your controller set to this “mono mode” and you are connected to Reason thru a MIDI interface, you should be able to see six red lights lighting up individually on the “MIDI In Device.” This means you are set up correctly and ready to start creating!

Let’s start out with an empty rack, then create a mixer and a reverb. Next, let’s create a Subtractor and load in “Warm Pads” from the Factory Sound Bank > Subtractor > Pads folder. I usually start out by setting the Subtractor polyphony value to 1 to prevent extraneous notes. Pitch bend for now can be set at zero.

Next hold down the Shift and Options keys (for Mac) or Shift and Control (for PC), click on one end of the Subtractor’s rack “ears” and drag it down. Do this four more times and you’ve got six Subtractors with the same patch and settings, ready to be assigned. Now you can go up to the top of your rack and assign each individual string its own Subtractor by using the pull-down menus on the MIDI In Device. I usually rename the Subtractors after the string that they’ll be assigned to, like “E string,” “B string,” all the way down to “Low E string.”

Now you can load up different patches into each of the six Subtractors, pan them around, change the octaves on each voice if you’d like- in other words, try some things and see what you get! Here’s an example of six Subtractors plus a groove to play to. I ran the Subtractors and part of the drums through a Scream module just to add some character. For this example I wanted to include a short sequence of me playing the MIDI guitar. Since Reason won’t record multiple channels at once, I used a sequencer program to record the parts that you hear all in one pass, and imported the files into Reason. Here are the example files: HexSubtractors.rns

Let’s do the same process again but this time it’s all Malstroms and while we’re just experimenting (no one is getting hurt, right?) let’s load all six with different rhythmic patches. I loaded some patches without listening to them just to see what I’d get. However, I did go through the Malstrom patches and set the polyphony to 1, pitch bend to 0 and changed the Modulator rates from triplet values to straight eights or quarter notes. Here’s an example of the six Malstroms played over a groove along with an added a bass synth line from the MIDI guitar that I overdubbed. It’s just a one take attempt at a bass line that hasn’t been fixed, but the input quantize feature really helps get the idea across quickly. (Solo it – you’ll hear that it’s a one take attempt!) Here are the example files: SixMalstroms.rns

Hey! Keep it Down Over There!

The next example of using MIDI guitar with Reason involves a happy accident that occurred when I MIDI’d up to a Redrum module. I had my MIDI guitar set to transpose up an octave, and as I played the guitar, I noticed that the high E string on my guitar would mute/solo different channels on the Redrum module. Here’s what was happening: Reason is setup so that if you play a C4 into the Redrum, it will solo channel 1. Play a D4, and it will solo channel 2, an E4 solos channel 3, and so on. (Check out the MIDI Implementation pdf chart that came with the program.) The high E string can be used to solo Redrum channels 3 thru 10. How is this helpful? With my MIDI guitar I can now use the first string (the high E) to control different gate patterns for other modules.

You are probably aware that you can use a Redrum module to gate the audio output of another module. With a Redrum’s Gate Out connected to a Subtractor’s Amp Env Gate Input, you can program different rhythm patterns on a Redrum channel, and the Subtractor’s output will be controlled rhythmically by Redrum. I merged several Redrum channel “Gate Outs” to a Spider CV and patched that to a Subtractor’s Amp Envelope In. Check out the audio example and the rsn file that goes with it to check it out. (Note: you won’t hear the electric guitar in the .rsn file, only in the audio example):TriggeredPatterns.rns

Musically the example is simple, but it shows how even when strumming the MIDI guitar, the Redrum rhythmic gates can make for a sync’d bass pattern. It can be hard to grasp initially what’s going on here, but it can open up new thinking on how to use Reason in a live situation where you use a MIDI guitar to trigger events in tempo. Notice that channel 2 on the Redrum is not muted, but that I’ve muted channels 3 thru 5. If I avoid the high E string, channel 2 is the “default” rhythm pattern. As soon as I play an E4, F4 or G4, channel 2 mutes and another pattern takes its place, all live and in sync! You can use this to mute and unmute loops depending on where you are fretting the high E string. Add a few other modules (like in the earlier examples) to this setup, and you’ve got quite a palette for music making. Good luck!