One Hand in the Mix – Building Crossfaders using the Combinator

With the invention of Propellerhead Software’s Remote technology, Reason is, more than ever, a powerful live performance tool, especially when used in conjunction with a control surface. One of the basic elements for many live applications is the ability to segue between two audio sources in real-time using a crossfader. The principle is simple where the level of two faders simultaneously change when receiving a single controller event. The fader levels are inversely proportional so as one level increases, the other decreases. This allows convenient blending or transitions between audio sources without having to use two controllers or separate mouse parameter changes. This installment of Discovering Reason describes two methods of creating crossfaders using the Combinator in Reason 3.0, and when used with an external control surface, present a powerful tool for live performance.

The principle of a crossfader is very straightforward, and most Reason users can probably already figure out how to create a crossfader patch using the Combinator and the Micro Mix Line Mixer. For those who have yet to explore this type of control, the following project is adapted from Chapter 5 of Power Tools for Reason 3.0, which describes using multiple modulation routings from a single Combinator Rotary control.

In Chapter 4 of Power Tools for Reason 3.0, an example demonstrated a technique of using a CV signal and an inverted CV signal to modulate two fader levels simultaneously in order to create a crossfader. A more elegant solution to this effect uses the multiple modulation routing features of the Combinator.

This configuration fades between the microMix channel 1 and 2 inputs, and now that it is saved as a patch, it can be recalled anytime in the future for use in other projects. The next section illustrates how to implement the crossfader with sound sources.

Cables from outside of the Combinator can connect directly into devices in the sub-rack, but these connections are not saved with the patches. The Combinator will indicate “external routing” when such connections are present. The two Dr.REX loops provide two different sound sources. Run the sequence to play the loops, then adjust the Combinator’s X-Fade rotary control to crossfade between the two loops. 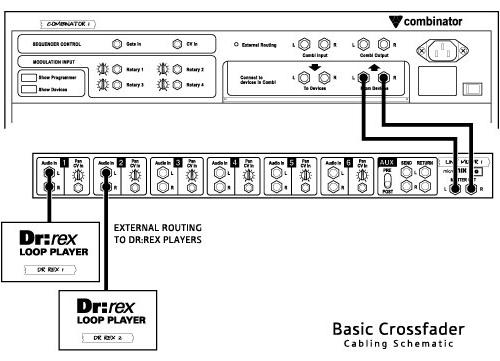 Figure 1. The basic crossfader only uses a single Micro Mix Line Mixer. The sound sources are two Dr.Rex players externally routed into the Line Mixer inputs. The Rex Players are not included in the Combinator rack.

There is an inherent problem with this configuration, heard as you fade between the two sources. As you run the sequence, slowly turn the X-Fade Rotary from left to right and back. As the control nears the mid point, the output level dips down. The linear fading characteristic of this configuration causes this decrease in level. The effect of the dip can be reduced by decreasing the range of modulation, but cannot effectively be overcome for this configuration. While this works fine for most applications, for live performance applications a more desirable effect is an equal-power crossfade.

The attenuation characteristics of both the ReMix and MicroMix mixer pan pots is not linear like the crossfade example above, instead the pan pots have a scaled attenuation rate called constant-power or equal-power. The output level of the two panned signals is constant between the left and right channels. The scaled attenuation of the pan pots can be used to create an Equal Power Crossfader. 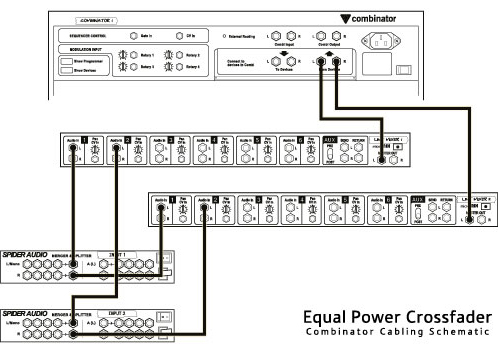 Figure 2. Two Line Mixers are used for the Equal Power Crossfader patch. Each Mixer handles a single channel, so two are required for a stereo crossfader. The Spider Audio Merger/Splitters are used as patchbays so that external stereo connections automatically route to the proper input channels.

The following is referenced on the Power Tools for Reason 3.0 CD-ROM in the Combinator patches folder. For the readers of Discovering Reason, the project illustrates how to create this effect on your own. An example Reason song file is included at the end of the project.

The Spider Audio Mergers are not a necessary part of the effect, but they provide an easy way to connect sources into the crossfader. The merger inputs take advantage of the auto-routing rules so that stereo sources are properly cabled in a single connection. One of these can be routed to the combinator’s inputs instead. Since four inputs are available, multiple input sources can be configured to mix through a single crossfader.

Run the sequence and adjust the X-Fade (Rotary 1) on the Combinator.

The louder crossfade action is noticeable immediately in the Equal Power Xfade example. The mid point between the two sources does not diminish as much as the basic crossfader example making it better suited for applications like mixing loops where even dynamics are desired during the transition.

The example song file features extra controls for input level trims to balance the incoming signals as well as a master level control. A few other features you might wish to add are kill switches on the button controls that modulate input channel muting. All of this can be assigned to a Remote control surface for use in a live performance or other real-time mixing applications, and of course, the crossfades can be recorded and edited on the Combinator 1 sequencer track.

Crossfader configurations effect can also be implemented as a Wet/Dry Balance control as well for real-time switching between a direct signal and a processed signal. Again, this can be especially useful for drum loops in a live situation where you want to create the energy of a performance rather than a preprogrammed sequence.

The following example file demonstrates using a ReCycle Loop playing from a Dr.REX Loop player being processed with a custom delay effect based on the “Beat Juggler” Project in Power Tools for Reason 3.0. The Loop audio is split into parallel signals using a Spider Audio Splitter. The dry signal passes through the splitter into the Equal Power Crossfader Input 1, and a split signal, processed through the delay effect, is connected to the Crossfader Input 2. The demonstration sequence is recorded in real-time with various control parameters for the crossfader, delay time, and delay feedback being controlled by a Remote Control surface.

A single fader is used to mix between the direct loop level and the delayed loop level via the crossfader, liberating a hand to manipulate the delay and feedback effects. Obviously this quite useful for live performances, but it’s also an exciting way to create tracks in the studio environment as well. You can quickly create rhythmic variation on the fly rather than tediously programming REX slices. This type of effect crossfader can be implemented with any variety of effects like the Scream 4 distortion, the ECF-42 Filter, or the Reverb units for even more variations.