Have you ever found yourself using a recent version of a software product like it was the same old version you used ten years ago? When you work so much with an application that the workflow migrates from your conscious mind to your muscle memory, it automatically becomes more difficult to pick up new tricks, and instead you will follow the path of least resistance and use the old method of doing things.

Over the years, Reason has seen many additions of new features, big and small. In this article we’re going to take a closer look at some of the small and sometimes overlooked items that were overshadowed by new instruments and other major features that stole the spotlight when Reason 4 was released.

The context-sensitive inspector strip on the sequencer’s toolbar is great for both micro- and macro-editing recorded events. In Arrange mode, selecting a single clip will bring up two fields in the inspector: Position and Length. You can then enter numerical values or use the up/down buttons to change the position or length of the clip.

If you select multiple clips, however, two additional items will appear: The Match Value buttons (represented by red equal signs to the right of their respective parameter fields), which allow you to match the position or length of the first selected clip in the timeline.

The inspector serves a similar purpose when you edit automation data; by double-clicking on an Automation clip and selecting one or multiple automation points, you’ll tell the inspector to bring up the position value and the automation value of these events.

The Edit mode is where the Inspector really shines, as it allows you to macro-edit note parameters such as Position, Length, Note (pitch) and Velocity. Here are a couple of situations where the inspector comes in handy in Edit mode:

Let’s say you’ve recorded some chords and quantized the clip, but you also want all the notes to be of equal length because you didn’t release the keys with perfect timing. First, make sure the first note has the correct length (tweak the note in the inspector to achieve this), and then select all notes inside the clip. 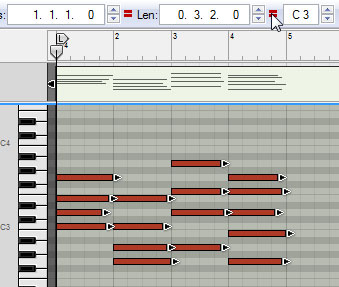 Then, simply click the equal sign to the right of the Length field, and all the notes will be adjusted accordingly.

The notes in this example were already quantized, but had they not been, you would’ve been able to use the inspector to quantize them one by one by selecting each chord and clicking the Match Value button for Position. This will move all notes in the chord to the same starting point.

Here’s another case scenario: Let’s say you’re working on a drum track, you’ve recorded some notes and you want all of them to have the same length and velocity. Once again, make sure the first note in the timeline has the desired properties by adjusting these in the inspector, and then select all notes you want to apply these properties to.

Now, click the two Match Value buttons and you’ll have a neat row of notes with identical duration and velocity. 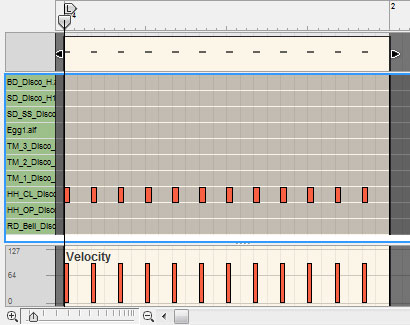 In the space now occupied by the Inspector, there used to be quantization tools in older versions of Reason. These were moved to the Tools tab in the Tool window, your one stop supply of note-tweaking tools. Here you can quantize – the old way, not the ReGroove Mixer way – as well as transform the pitch, velocity, length, tempo and order of recorded events. We’ll go over these tools from top to bottom.

The Quantize tools include an Amount percentage setting. The value is 100% by default, meaning that the selected events will be hard-quantized to the exact value currently selected on the Value drop-down menu. If the value is, say, 50%, notes will only be moved halfway to their closest quantize value positions. This is useful if you want to tighten up a sloppy take while still retaining some human feel. If for some reason you want more human feel than the original recording can offer, you can add this artificially by using the Random setting. 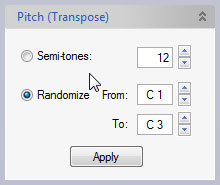 The Pitch tools feature a basic transpose function plus a randomization tool. When Randomize is active, the pitch of the selected notes will be randomized within the specified range. This may not be of much use on tonal instruments, but it’s very useful for REX loops since randomizing notes on a Dr.REX track will result in the loop segments being completely rearranged. 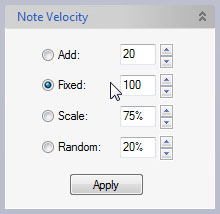 The Note Velocity tools are: Add, Fixed, Scale and Random, and their functions are pretty self-explanatory. The Add field lets you add (or subtract) an integer value to (or from) the velocity on all selected notes. A value of 20 will change velocity 92 to velocity 112, and velocity 115 to 127 (since 127 is the maximum value). The Fixed tool will apply a fixed velocity value to all selected notes. The Scale tool will change velocity values according to a percentage value, as follows: If Scale = 100%, nothing will be changed. If Scale = 50%, velocity 110 will become 55, 26 will become 13, etc. The Random tool uses a percentage value to randomize velocity values. For example, with a Random value of 10%, velocity 100 will be changed to anything between 90 and 110. 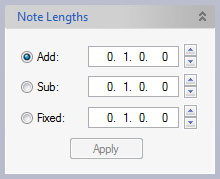 The Note Lengths tools let you extend or shorten note lengths, or make them equal. When Add is selected, notes will be extended by the amount specified in in the Add field. The Sub (subtract) tool has the opposite effect. The Fixed tool will simply apply the note length specified in the Fixed field to all selected notes. 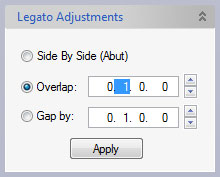 Legato adjustments lets you fill the gaps between notes by tying them together, even to the point where they overlap. Side By Side (Abut) will extend a note to the exact point where the next note begins, Overlap will extend notes beyond that point, and Gap By will truncate notes in order to leave gaps of equal length between them. One situation where legato adjustment comes in handy is when you have rearranged the notes for a REX loop so that the slices will play back in a different order (this can be done with the Alter Notes function, more on this below). When you use the Alter Notes function on a Dr.REX track, the notes will be shuffled around, but since REX notes are often of different lengths, this will leave gaps between some notes, while other notes overlap. For example, this…

Notice the overlapping notes in the beginning and the gap in the middle. After applying Legato Adjustments > Side By Side (Abut), the result will be…

…which eliminates the gaps and the overlapping. 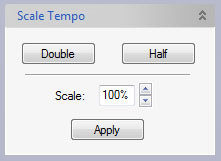 Scale Tempo does exactly what it says, although it has nothing to do with the global tempo or automation thereof. What it does, rather, is stretch out or compress a sequence of notes. This is useful when you want to mix double-tempo or half-tempo elements (such as drum loops) with “normal” tempo elements.

Alter Notes lets you randomly rearrange the positions of recorded notes. This is a more musical function than Pitch randomization, since random pitch will lead to atonal results more often than not. It works best on drum loops, drums and monophonic parts such as basslines and arpeggios.

Finally, there’s Automation Cleanup. When you record automation, you will often end up with large clusters of automation points out of which many are redundant, since automation in Reason 4 is vector-based. For example, you may have an automation clip that looks like this:

As you can see, many of these automation points are located along straight lines between other automation points, which renders them useless. The Automation Cleanup function can spot the redundant points and delete them automatically, so that the above clip will look like this:

This was achieved with the Maximum setting. If you’re worried about the risk of nuances getting lost you should go for a more moderate setting.