Right, so… where were we? Oh yes, Spider CV Merger & Splitter, the other eight-legged freak in the Reason terrarium. Now, this is the evil twin of Spider Audio, and this one you have to handle with caution because the webs of cables that can build up around these things can become more or less impenetrable. While it may be tempting to try and be as economical as possible (for example, using both the split and the merge sections on a single unit), we encourage you to spread the burden across as many Spider CV units as possible – they are the most CPU friendly Reason units of all, and it’s going to be a lot easier to track down the right cable if they aren’t all on top of one another. And now, on with the show. 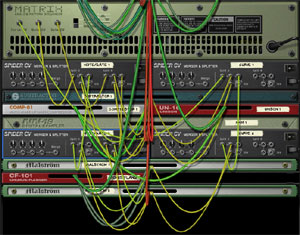 The first (and fairly obvious, but fun nonetheless) setup we’ll try is all about stacking. Since a single Matrix unit can now play as many synths as the CPU can handle, you can build up sounds by using any mixture of Subtractor, Malström or NN-sampler sounds. If you run out of split outputs, just add another Spider CV unit to the chain. In the example filestakkabass.rns we’ve built a massive bass sound with two Malströms, one NN-XT and one Subtractor. For this you actually need four Spider C units; the Matrix has three outputs (Note, Gate, Curve) and since these need to be branched out into a total of twelve cables for four synths, you will need to link a few CV units together in order to serve all four. Check the example file, turn the rack around and see if you can follow that spider…

Mixer automation is something one will usually let a main sequencer track take care of – and that’s great, it offers complete and minute control over all parameters. But sometimes you wish that automation itself could be automated, and thanks to the Spider CV split function this is possible – at least as far as channel Level and Pan is concerned. With the aid of a single Spider CV unit you can control the Level and Pan of three channels at once, and by linking multiple units together it’s theoretically possible to control all fourteen channels, either all at once or through some customized sub-grouping scheme.

But let’s not go nuts like in the picture here – let’s stick with the three-channel idea for now. What we’ll do first in this example –splittermix.rns – is create a 14:2 mixer and three Dr. REX. Then we’ll create a Spider CV unit and route the split outputs A and B to level and pan, respectively, on the three active mixer channels. And then we’ll create… a Matrix? No, been there, done that. Instead we’ll use a Malström – not for its sound capacities, but because it features Modulators A and B, two excellent LFO-type modulation sources with a massive amount of crazy curves in store. Using Mod A for level and Mod B, we’ve got automation of Pan and Level covered, and since the Malström itself can be automated from its own track, the modulation curve types and rates can be changed during the song.

Hit play in the example file and hear this author haphazardly messing around with the settings, and remember that the only automation going on here is on the Malström track. The Malström comes highly recommended as a modulation source if you’re looking for things you can’t get out of the standard LFO waveforms and the Matrix is too aliased.

Another situation where the Merge functionality proves highly useful involves ReDrum. Right, we already know several ways of using CV for rhytmic modulation: You can use a Dr. REX and let the loop slices send gate signals. You can synchronize a unit’s built-in LFO to MIDI. You can “borrow” the LFO from device and modulate another. You can use Matrix Gate and Curve data. So far, so good. But what if you want a ReDrum to do it? The thing with that is, ReDrum sports per-channel Gate outputs, so you can’t have an external target modulated by the entire drum pattern, only by one drum at a time. Here’s where Spider CV’s merge function shines: You can take the Gate output of up to four ReDrum channels and merge them into one. And of course you can set up multiple Spider CV units to merge the Gate signals from all ten ReDrum channels. So let’s try this: 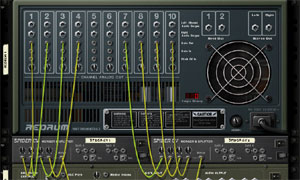 Submerged.rns – In this example file, the idea is to merge two separate groups of ReDrum Gate signals and have them modulate one instrument each. We’ve got the drums, a bass and a pad-ish sound.

Now, having both the bass and the pad modulated exactly the same way will sound a little chunky, so here’s what we’ll do: We merge the bass drum and snare drum Gate signals and route these to the filter on the bass synth. For a secondary modulation source, we merge two of the hi-hat channels – this will provide the modulation pattern for the pad sound. Both the bass and the pad are run through ECF-42 filter units, and these are what the ReDrum will modulate. Having the bass filter retrigged each time a bass drum or snare hit occurs provides a nice tight groove at the bottom, and it gives a nice symmetry to have the high end percussion (the hi-hats) control the high end synths.
In this particular example the ReDrum is doing its normal job as a sound device too, but this isn’t a requirement of course – it can be silent and act only as a CV/Gate “puppetmaster”.