Getting Down and Dirty with Delay 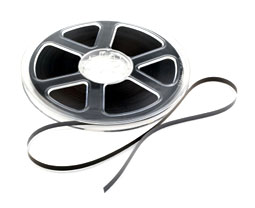 In our tireless efforts to build new and exciting Reason devices from principal building blocks – because A) it’s fun, B) it showcases the modularity and flexibility of Reason, and C) we played with Lego as kids, and never really grew up – in this month’s Discovering we venture into the realm of complex delay effects. This is a category of FX for which there is no ready-made device in Reason’s toolbox; there’s the DDL-1 for your most basic delay needs, and there’s the RV7000 with its multitap and echo algorithms, but there is no Ultimate MegaDelay™ with six dozen knobs and a coffee machine.

Our mission today, then, will be to build our own in the garage. We’ll be using the trusty old DDL-1 digital delay as a starting point for these patches, and on that foundation we’ll add some flavor and spice to give the delay a unique texture. We’re presenting two patches; the first is a lo-fi delay from the olden days, and the second is a more complex and spaced out creation from an unspecified time in the future. 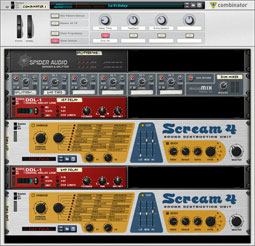 As the name may suggest, this patch attempts to emulate a vintage tape delay sound with a bit of compression, distortion and degradation thrown in. To achieve the kind of squelchy effect we need, we turn to the Scream 4 and its Tape algorithm – Reason’s go-to tool for all things warm and fuzzy.

At first glance, the front panel of this setup looks fairly straightforward, and you’ll probably assume that it’s a stereo delay with two pairs of delay and Scream units, one for each channel. But it’s not a parallel setup, it’s a serial one. Since we’re going for a tape-style delay here, the signal needs to deteriorate slightly for each cycle, and we achieve this by doing the following: The signal is passed through the first DDL-1 and the first Scream 4, and comes out slightly squelched. The processed signal is then passed through the second DDL-1, which is set to a 50/50 mix of dry and wet signal. Dry, so that the signal from the first delay is heard, and wet, so that the signal – which has already been processed with the Tape algorithm once – is “tape-ified” again by the second Scream 4. On top of that, we use some naughty wiring to create a feedback loop where a wee bit of signal is fed back to the first DDL-1 unit, adding a phased quality to the delay as it fades and dissolves. Confusing? It will make a whole lot more sense when you hear the result. 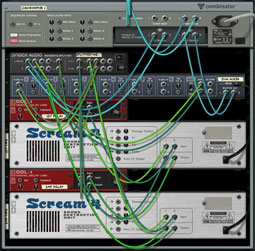 The Combinator’s To Devices output is connected to the Spider Audio’s Merge Input, rather than straight to the FX device chain. This is so that the external signal and the processed signal that comes back from the FX chain can be merged and fed into the chain simultaneously (the feedback loop we mentioned above). The Spider Audio’s Merge Output is routed to the first DDL-1 unit, from which the signal is routed to the first Scream 4. From there, it continues to the second DDL-1 unit’s input. Here, it’s time to split the signal in two – which is why we connect it to the Spider Audio’s Split Input – because it needs to go both to the second Scream 4 (for another round of squelching) and the 6:2 Line Mixer (so that it can be sent back into the chain, creating a feedback loop). And finally, from the second Scream 4’s output to the mixer. Done.

Any delay unit will of course need time and feedback controls, so we’ll use two of the Combinator’s rotary controls for that. We’ll also add a third rotary control called “Extra Squelch”, which warrants an explanation: What this knob will do is control the Aux Send parameter on channel 2 of the Line Mixer. This determines the amount of signal that’s fed into the feedback loop. We’ve set the range to 0-21, this is about as far as you can go before the feedback loop turns into unstoppable mayhem.

Finally, we thought it might be a good idea to have a switch for tempo sync. Since it’s not particularly natural for an analog tape delay to have rock solid tempo sync, it makes sense to have the option to switch to millisecond mode.

Here’s the patch itself, and here’s a couple of sound examples: The first one illustrates the classic tape delay effect put to somewhat exaggerated use in a reggae context, on the snare drum and the voice sample: Elevator reggae

The second example goes bonkers with the feedback loop and uses heavy automation on the delay time parameter to create the impression of an FM radio on a sugar rush: Radiohyperactive 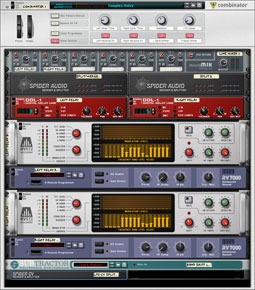 Our second tinkertoy is a stereo delay with an optional reverse effect, courtesy of the RV7000’s Reverse algorithm. Also featured are LFO-controlled band shifters created using a couple of BV512 Vocoders in EQ mode. The result is a trippy, ethereal delay effect that pulls ghostly shapes of the original sound backwards into the mix, where they bounce around in the clouds and leave jet vapor trails that slowly dissolve. This effect can fill out a mix nicely and create a dreamy atmosphere; just throw it a few sparse notes and let the ripple effect take it from there. 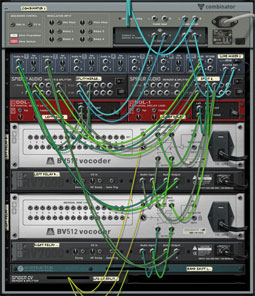 Ooookay, brace yourselves as we attempt to follow the signal path here. The To Devices output goes straight to the first DDL-1 delay (Left). From there, it goes to the Merge Input on Spider Audio 1 (along with another signal, but more on that later). The Merge Output on Spider Audio 1 is then connected to the Split Input on Spider Audio 2. Here, the path breaks in two. One leads to the second DDL-1 delay (Right), and from there to Vocoder 1, and on to RV7000 1 (so far, disregarding the Spiders, the path is Delay L > Delay R > Vocoder 1 > Reverse Delay L). The other leads to Vocoder 2, to RV7000 2 (the path here is Delay L > Vocoder 2 > Reverse Delay R). The signal from RV7000 1 is routed to channel 1 on the Line Mixer, the signal from RV7000 2 is routed to channel 2, and the Line Mixer’s Master Out goes to the From Devices input on the Combinator. Finally, the Aux Send on the mixer is connected to the Merge Input on Spider Audio 1, where it is merged with the signal from the first DDL-1 delay (the first stop for the original signal) and tossed right back into the FX chain one more time. One last thing: We want to use LFO1 on the Subtractor to control the Shift parameter on both the Vocoders, so we add a Spider CV for splitting the signal. And that’s a wrap.

We want to be able to control delay time and feedback, as usual, but since this is a stereo delay we’ll want to dedicate one rotary control for each side. We set Rotary 1 to control the DelayTime parameter on the first DDL-1 (Left), and Rotary 2 to control the same parameter on the second DDL-1 (Right). Rotary 3 controls the Feedback parameter on both DDL-1 units. That leaves us with Rotary 4, which we’ll use to control the LFO1 speed on the Subtractor. It’d be a shame to leave the four buttons on the Combinator unused, so we’ll use those to toggle the Reverse delay effect and the Band shifter effect on/off. This is done by linking each of the buttons to the “Enabled” parameter on each of the devices (the two RV7000’s and the two Vocoders) and setting the Min value to 2 (Bypass) and the Max value to 1 (On).

You can download the patch here. And here’s a quick demo of the Complex Delay in action: Floatation

Listen to it once, then disable the Complex Delay by switching it off or silencing Aux Return 2 on the main mixer, and listen again. You’ll notice that pretty much all sense of depth and width in the arrangement disappeared once the delay was removed from the equation.