This installment of Discovering Reason is adapted from my book, Power Tools for Reason 2.5, and describes how to create a high pass filter using the BV512 Digital Vocoder. This is an independent insert effect controlled by cutoff frequency and resonance sliders, and the parameters can be automated with a sequencer track or modulated by CV sources. When filtering a signal though the BV512, the results are not perfect, however in the right situation, the configuration can create some unique effects. The audio and CV modulation principles used in this project demonstrate some alternative ways of using the BV512 CV modulation features.

There is an alternative method of processing sounds through a high pass filter, and before proceeding with the project, I’ll briefly explain how this is achieved. First, you need to solo out the signal that you want to filter. Now, render this signal to an audio file using the export loop or export song feature. Create a NN-XT and load the audio file into a sample zone. Program the sequencer to trigger the sample, and during sample playback, the signal can be processed using the NN-XT LP12 filter. This is a tedious process, but it provides the best results possible without using other software or hardware. If you are willing to sacrifice some audio quality, then the 24dB high pass filter configuration is an interesting alternative.

How the High Pass Filter Works

The high pass filter configuration starts with raw, unfiltered white noise generated by a Subtractor synthesizer. The Subtractor audio output is connected to the modulator input of a BV512 Vocoder in 32-band mode. White noise is analogous to “white light,” the mix of all colors in the visual spectrum. Likewise, combining all frequencies in the audio spectrum creates white noise. When the BV512 receives white noise on the modulator input, all vocoder bands open, because equal amounts of all frequencies are present.

Sweeping the LP24 cutoff frequency closes the vocoder filters from the high frequency bands down to the low frequency bands. In essence, the BV512 filter bands mimic the behavior of the Subtractor LP24 filter, and carrier signals will be filtered like a low pass filter. 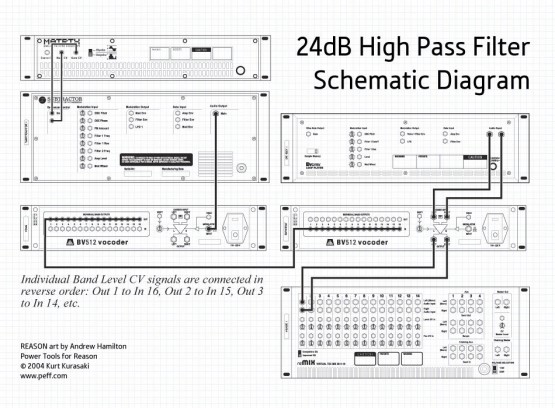 The schematic (above) presents a clear overview of the device cabling. The high pass filter is comprised of several different stages, and the directions are grouped to specify the connections and parameter settings of each stage. An example RNS file is provided below, but you should try building the effect yourself.

Carrier Signal Source The Dr.REX loop provides a source to demonstrate the filtering, and can be replaced with any mono or stereo audio signal source.

As the loop plays, adjust the Subtractor Filter 1 cutoff frequency to sweep the high pass filter. Because the modulation is reversed, a filter cutoff setting of 127 is fully open, and decreasing the filter cutoff will sweep the high pass filter up. You will first notice that the audio contains artifacts caused by the chaotic levels of the noise modulator source, and as indicated earlier, this effect may not be suitable when audio quality is important.

The chaotic impulses of white noise cause the BV512 band levels to jump around erratically. At the expense of increasing response time, a longer decay time smoothes out the glitchy artifacts. Increasing the “Main” BV512 decay time to 54 or greater will smooth these out. If you use the high pass filter for fast sweeps or gating, lower decay settings are recommended.

Using the spectrum analyzer, compare the Subtractor filter to LP12 response with the LP24. You can see how the LP24 band reject response is sharper than the LP12 filter type. You can also create a 36dB filter with a very steep cut by enabling Subtractor Filter 2 with Link on, and setting the cutoff frequency to 0. Also, the “Main” BV512 Vocoder can be used as a low pass filter to create a merging filter sweep effect where two signals are cut and open simultaneously with one being filtered down and the other filtered up.

Adding resonance to the high pass filter will sound a bit harsh because the resonance spike will overload the BV512 modulator input. Compensate for the resonance gain by reducing the Subtractor Master Level. For example, set the Master Output Level to 42 and set the Filter 1 Resonance to 100. For other settings, balance the two controls so that the modulator signal peaks do not overload the inputs and vocoder band levels

Filter 1 can be modified by any of the Subtractor modulation sources, and the filter modulations subsequently affect the high pass filter. Try the following modification to create a tempo synchronous sweep using LFO1:

Using a gate CV from a Matrix connected to the Subtractor Filter Envelope Gate Input, you can create a pattern controlled high pass filter. Rhythmic patterns programmed on the Matrix will trigger the Filter Envelope without interrupting the white noise signal.

The high pass filter adds a new twist to pattern controlled filtering because it uses inverse envelope modulation. The envelope parameters on the “Main” BV512 can be used to further shape the response of the PCF. Zero attack and zero decay times lend to very sharp patterns, but a decay setting of 30 or greater adds an interesting lag to the effect.